Another first for our Heart Experts

Heart specialists at Newcastle’s Freeman Hospital have performed yet another UK first, using a pioneering technique to rectify damage to patients’ hearts following a heart attack.

The procedure known as transcatheter ventricular enhancement is not yet standard clinical practice, and the Regional Cardiothoracic Centre at Freeman Hospital is the first, nationally, to carry it out.

This first operation was performed by a team of heart specialists led by Professor Azfar Zaman, Consultant Interventional Cardiologist and Honorary Professor of Cardiology with Newcastle University, and Professor Stephan Schueler, Consultant Cardiothoracic Surgeon – both based at the Freeman Hospital.

Professor Zaman explains: “Following a major heart attack, the heart muscle heals by forming a scar. Over time this scar can stretch, which in turn stretches the normal heart muscle. After several years, this stretching of the heart by the scar tissue can lead to heart failure, which in turn can become life-threatening.

Until now, the only way of removing the scar tissue has been through open heart surgery which many patients with heart failure are simply not well enough to tolerate. If we cannot treat them, the prognosis is not very good.”

The transcatheter approach is a minimally-invasive procedure which means it does not require the chest to be opened and is carried out by keyhole surgery involving an Interventional Cardiologist and a small cut in the chest wall involving a Cardiothoracic Surgeon.

Professor Zaman continues: “This new procedure seeks to reduce the size of the scar tissue by literally ‘tying it off.

The surgeon makes a small cut in the chest to access the heart and puts in some stitches to pull healthy tissue over the scarring. At the same time, the interventional cardiologist enters the main vein in the neck using a special catheter – an extremely thin tube – to reach the heart. They meet in the middle.

The Cardiologist then picks up the stitching using a special device in the catheter, and pulls it like a purse string, effectively closing the scarred area. The heart is no longer under stress by the scar tissue and can pump blood round the body as normal again.”

Professor Stephan Schueler, the Consultant Cardiac Surgeon involved adds: “This approach is a revelation for patients who find themselves debilitated by severe heart failure due to scarring and faced with high risk treatment options.

Because we are not resorting to open heart surgery or operating on the heart itself, we do not need to stop the heart and use cardiopulmonary bypass. The minimally-invasive procedure takes place with a beating heart and so is much safer for the patient.” 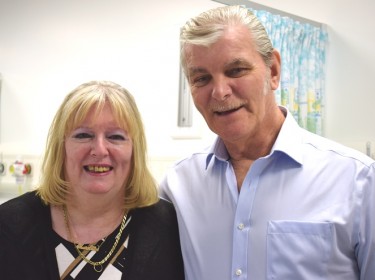 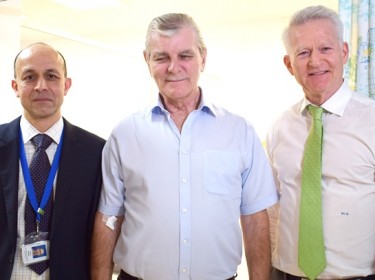 The first patient to benefit from this revolutionary new approach is Mr Ian Whitehead – a 63 year old grandfather of two from Nafferton in East Yorkshire.

Mr Whitehead had a heart attack in 2003 and was successfully treated by thrombolytic (clot busting) therapy and insertion of coronary stents.

After a while he began to display the classic symptoms of heart failure – breathlessness and fatigue.

He was referred to the Regional heart failure service at the Freeman Hospital where he was assessed by the specialist heart failure team and an echocardiogram showed scarring on his heart which was contributing to his dilated heart and worsening his condition.

Mr Whitehead, who is married to Mary, said: “I’ve been a patient at the Freeman Hospital now for a couple of years when I was referred to see a Cardiologist who specialises in advanced heart failure.

I was feeling really breathless, could hardly walk and was so tired all the time. So when the doctors told me I would be suitable for this new procedure they had never done before I thought ‘why not’.

I met Professors Zaman and Schueler who explained everything to me in the littlest detail, showing me how they would do it on the computer. I was a bit worried but then thought “why not”.

The operation, performed just four weeks ago, took over three hours and Mr Whitehead, a father of three, is now recovering.

He said: “I feel less breathless than before and can walk further than I’ve been able to for a long time. The doctors have been absolutely fantastic – they have an amazing team here at the Freeman Hospital and I could not have asked for more support.

“I now need to do more exercise so I can help the heart as much as possible and am looking forward to being able to lift my grandchildren – something I’ve not been able to do up until now.”

I …. am looking forward to being able to lift my grandchildren